There are trips you make on the spur of the moment without a plan whatsoever. Then there are trips you having been waiting your whole life for. I enjoy both the "Climbing to the top of a pyramid in the jungle has been on my bucket list since I was three" type, as well as the "invited to drive across the continent tomorrow because Archie McPhee is having a 30% off all pickle themed merchandise sale" brand of vacation. Those in the middle sometimes get overshadowed. But my upcoming excursion contains elements of both.

While roaming the streets of Valencia, Spain a couple of years ago I happened to peruse a carosel of postcards. A few of these were plazas I recognized from about the city overlaid with elaborate cartoon characters. Certainly beautiful, but why, I thought, make fake pictures into postcards. Later that day I saw more pictures up on a wall in a grocery store in this same odd style. What looked like two or three story tall brightly colored cartoonish figures looming over the town plazas.

"Have you been to it before?" some peculiar creature striking up an uninvited conversation asked me.

​  "The Plazas?" I returned his question with a rather clever one of my own.

I stood silent for more moments than is typically considered appropriate as I attempted to process his statement. Then it hit me. These pictures weren't some photoshop artist's interpretation of mankind's unfettered youth. These were actual photographs depicting a real life event taking place in a real universe. This festival actually existed and I could, potentially, be a part of it.

I turned to ask my new companion the name of this festival and learn more about it, however, he had by this time come to his senses and run off in horror and embarrassment at his own impetuousness, leaving me to ponder alone. Fortunately, I still possessed one ingenious fact finding tool in my arsenal.

My "Valencia Spain festivals" search on line was an unmitigated success. For there I found all the information I required. Descriptions of these towering structures created out of only the most combustable of materials. Intricate, gaudy, colorful creations born of the events of the previous year to enchant and delight us for a brief blink of an eye during their short lives. Then in a violent, purifying conflagration the searing blaze and exploding fireworks return them to the memories and dreams from which they sprung. An old year gone; a new rising up from the ashes.

The more I learned about Las Fallas, the more aware I became that this event had adorned my bucket list all along. Somewhere in my psyche a part of me knew I needed to experience a party including three story tall works of magnificently detailed art, crowd endangering fireworks, city threatening bonfires, life changing memories, and pant size altering copious amounts of paella and street food. The desire to participate in this insane artistic fantasy has existed inside me every bit as long as my need to gaze upon the flower fields of Holland and haggle prices in the greatest flea markets of Europe.

Well, this is the year for all of these. The Las Fallas calls to me and I must heed its seductive lure. 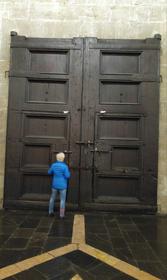 ​A Summons From Las Fallas