The Diabolical Seduction Of Barcelona 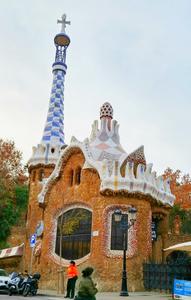 "If you are only going to spend one day in Barcelona be sure to visit . . . " would be he most stupid and irresponsible beginning to any sentence one could ever utter involving Barcelona. To even imply that it is possible to go to Barcelona one day and leave the next constitutes such an egregious disservice to anyone in direct line of such a suggestion that the speaker of said line need never be heeded again.

Granted, I must confess that personal safety might benefit from a more hasty departure from the city. Nevertheless, severe and long-term side-effects aside, the sheer joy and exhilaration that come from spending time in this rather unusual place make the therapy a small price to pay. A word of warning, however, is only fair.
The day begins innocently enough. Walking and exploring the bizarre and fascinating streets of Barcelona, architect Antoni Gaudi's work and influence evident everywhere. Barcelona is like your crazy Aunt Muriel, your mother's youngest sister, whose house is a veritable museum of eclectic, peculiar oddities that she has collected over the course of her life and displays proudly and haphazardly in every available space of her beautiful home. The house is beautiful, but sometimes you forget because you can't see the beauty through all the "huh?" though. Aunt Muriel couldn't be more pleased.
"You think that's strange?" she says with a smirk, "Well get a load of this."

Barcelona, like Aunt Muriel, is a youngest child. A spoiled, totally indulged, attention seeking, look-at-what-I-can-do egomaniac. Also like Muriel, Barcelona is a trifle mentally fluid. Unlike Aunt Muriel, however, who is limited to a house, Barcelona has an entire city in which it can store and display its crazy. When you visit Barcelona, regardless of what you see, there are a dozen other things you can't move on without seeing. Look at this building I made that looks like a gingerbread house," Barcelona says proudly. Then, "Wait, you can't go until you enjoy a chocolate massage."
Wandering unprepared around Barcelona you can wind up in need of chiropractic care due to the number and severity of double takes you find yourself performing. "Am I in Bedrock?," you wonder, as you walk through a set from the Flintstones. Then you start to run from a building you thought was melting. After a while you wonder if they realize how dangerous this could be to an unstable mind. A stroll through Barcelona is like participating in a massive scavenger hunt. Now find a building with giant Easter eggs on top. Then find a pacifier embedded in a sidewalk. Get a picture of Marilyn Monroe dancing in a window. Actually that could be a fun game. If you're going to Barcelona let me know and I'll give you a list of items.
You continue to meander about the city enjoying the sights and ignoring the tingling sensation at the base of your brain. You're still okay when you walk under the giant female legs sticking out of a fascinating old building. You nod cordially to an invisible man who tips his bowler hat to you as you pass on the sidewalk in front of an organic castle. Bizarre scenes play out all around you, but you barely think to be surprised any longer. Then you come to the Sagrada Familia. "Is that a spire of fruit on that church?" you ask and come to the realization that they're doing it on purpose. The city wants you to think you're losing your mind. Then it happens. You reach Park Guell; and the madness becomes real. At this point you and Barcelona share a special bond and understand each other.
"You really are quite eccentric and disturbed, Barcelona. You know what? That's okay. I respect that."
And Barcelona responds, "You think that's weird? Wait til you get a load of this . . ."
So off you and Barcelona go slipping into the night, embracing the madness.