The city of Brussels is quite surreal at Christmas time. There is a big, thick, gooey layer of Christmas slathered generously all over everything. And should you find anything which doesn't immediately appear filthy with Christmas, it is most likely explained as difficulty seeing through the lava flow of chocolate surging through the streets.
What I am saying is if you wish to experience no-holds-barred, seizure inducing, diabetic coma causing Christmas the way it was meant to be, Brussels might be for you.
Really it's the gift giving that has led to the watered down, less magical Christmas. Most people when asked the central ritual of Christmas would, whether they want to admit it or not, say exchanging of presents. And I am not talking about the "meaning" of Christmas. I don't even care. Even the world's holiest most spiritual people who would never dare utter a "Happy Holidays" or shorten Christmas with an "x" expend the majority of their Xmas spirit deciding what gift card to get Aunt Bertie.
But anyway, Brussels has managed to hold onto the true spirit of Christmas and remembers what really matters. Tons of decorations, everything lit up like a fairy tale land, carnival rides and stands everywhere, and food that the aroma alone could take out every vegan in a 500 mile radius. That's what makes Christmas Christmas. Excess: unbridled excess.
We all need to heed their example. If you live in a single wide trailer and choose to spend two months worth of paychecks on Christmas lights to express yourself when you haven't yet paid your rent for August - do so proudly. Please don't mistakenly think for a moment I am saying you have good taste or class, because almost assuredly you do not. But be you, in all your tasteless gaudiness and should you desire to extend your blow-up atrocities even further, you do so.
And by the way, your neighbors are jealous, regardless what they say. No you moron, not jealous of plastic Balthazar on your rooftop or the Bumble putting up the star in your nativity scene or any of your other visual crimes against humanity. No, they are jealous of your nerve and your freedom and only wish they possessed the courage to put up their own hideous atrocities from which they could derive their own childlike joy.
This is what Belgium has taught me. When it comes to Christmas, there is no such thing as too much. And I know I'm not the first to say it - though I am undoubtedly the wisest - or at the very least, the most recent - but mayhaps the spirit of Christmas doesn't have to get stored in the attic with the set of vintage Lorenzo Lamas Christmas ornaments. Or washed down the sink with the fuzzy, week old eggnog. Or returned with the monogrammed travel bidet to Sears. Be as much you as you want, all year long. Be so much you that other people get a little creeped out. I'm not saying you should be happy and giddy as a school girl. Be you.
If you're a grumpy old curmudgeon who likes to gripe about those damn kids trampling your daffodils, go all out. Become a legendary misanthrope. Be that guy in the neighborhood who children are are afraid to go in your yard to retrieve their ball. But let me tell you something. You may not be as much a curmudgeon as you think. Sorry, but your protective nature towards your daffodils says otherwise.
Be you. And don't be one of those "unique individuals" just to be part of a group. Be an emo with a smile, a red neck with an ounce of intelligence, or a gun-toting republican hippie. If you're a hipster at heart, by all means, be one. But if you feel like shaving that ridiculous pathogenic sponge off your face, do so.
Take the advice of Brussels. Brussels looked at itself and said, "Hey, there's a building over there that looks like it could exist outside of someone's dreamworld. That's no fun. Let's fix that." Brussels didn't think, "What if Ghent thinks we look weird." Brussels said screw you Ghent and put big giant blue bowties up in the sky snd merry-go-rounds with puffer fish.
So next year quit being embarrassed and get that 1970's disco Christmas album out of storage and the white tree out of the back of the crawlspace and enjoy Christmas the way you know you want to. In the meantime, figure out what makes you you and do you like only you can. 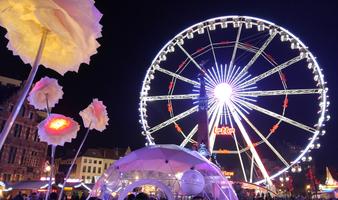