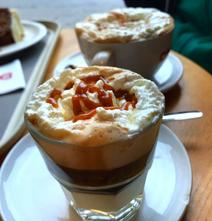 There is a saying we are all familiar with which states, "You get what you pay for." Truthful and accurate to a point. If you buy a pair of 20 dollar tennis shoes at your local store that caters to the tastes of people who consider cargo shorts and tank tops the high end of fashion said shoes are going to last you about 20 years less time than the $250 wing tips you scoffed at another person for buying. However, this truth is not universal. I have bought used cars that outlived luxury vehicles by hundreds of thousands of miles for roughly one millionth the cost and I was able to break my old 8-track tapes out from storage while driving. But the most important exception to this belief is the world of coffee.

​ Particularly the coffee in Spain. A dollar and 50 cents in Valencia gets you a cappuccino every bit as delicious as a five dollar one in much of the rest of the world. This is an important factor for someone who bases all financial transactions in cappuccino currency. Those sunglasses are 12 capps or that airline ticket costs 167 capps, for example. Which means an automatic tripling of your net worth in Malaga, with the only effort on your part: being in Malaga. This requires no more effort than "being in Cleveland" or "being in Brussels," where you are expected to pay $4.50 for a cappuccino.

But Spain isn't limited to the simple cappuccino - and when I say simple I mean in the sense that it is the easiest coffee for a non-gifted barista to screw up. But Spain also serves up great cafe con leches, espressos, lattes, and, of course, the flagship of coffees for those who like their life giving sustenance thick and sweet - the Cafe Bonbom.

Valencia, birthplace of the Cafe Bonbom, is also ground zero for so many of the world's greatest advancements. I am not referring to any technological, medical, or political discoveries. We are talking about inventions that make life truly worth living. Paella, turrones, bunyols, and the introduction of horchata to the western world. Coca Cola also would not exist if it weren't for the Valencians. But, hey, anybody can have an off day. I am not sure how many of human kind's greatest creations are allowed to come from one city. It seems unfair that Valencia be granted the rights to so many, leaving nothing for so many others. Metropolis, Illinois for example has to satisfy itself laying claim to a 15 foot tall superman statue, and Austin, Minnesota has to settle for a claim to fame as the birthplace of SPAM. Seriously Valencia. Don't you think you are being a trifle greedy? Isn't Café Bonbom enough?

Coffee represents the pinnacle of life's greatest pleasures. It brings us joy and keeps us healthy and warm. The importance of a good health regimen cannot be understated; and the most important part of that routine is coffee. Your physical well being is dependent upon it, as well as that of those around you. No, not because of the nutritional value or even the caffeine - although our prisons are undoubtedly less crowded thanks to coffee. For those who would argue that coffee is for mental health more so than physical my question is, "Since when are the two exclusive?"

The drinking of coffee, or tea if you prefer, is the thing that starts your day out correctly and helps reset a bad one. Coffee reconnects us with old friendships and assists us in the creating of new ones. It can calm us down before that big presentation or perk us up when we stayed up too late preparing it. Coffee keeps us company when we are alone and draws us closer together when we are with friends. So when we are in Spain coffee has three times the buying power to accomplish all these tasks.

There are so many great locales in Spain in which to imbibe the nectar of the coffee bean, but I shall simply list a few of my personal favorites.

In Valencia, L'Espresso on Carrer de la Pau serves a delightful cappuccino in a pleasant atmosphere. Near the Torres de Quart sits a great little place for breakfast and coffee called Aqua Dolce. Two places sitting along the Placa D'Alfons el Magnanimo serve a delicious beverage. The minimalistically named Coffee House will grant you a cup of quality coffee or a variety of teas with your pastry and gelato that you would be foolish not to partake in. Then there is the Café de les Mones, coffee of the monkeys in Catalan. As far as I can tell the name comes from the pictures of monkeys adorning the walls. I did not see any barista monkeys actually brewing coffee in the back or read anything about monkeys predigesting the beans like civit coffee in Indonesia, but I didn't ask either. Because if you are enjoying your Café Bonbom the last thing you want to know is that it spent some time traveling through the intestines of another mammal before you.

In Barcelona my favorite place is Departure Coffee on Carrer de la Verge for its quiet atmosphere and industrial decor. It's like Restoration Hardware decided to forget selling their inventory and just open a coffee shop instead, which I personally would enjoy frequenting. Another place I enjoyed was Satan's. Satan has surprisingly subtle taste in both coffee and decor. The last thing I expected to think while leaving Satan's was how cute and homey it is.

Getting The Best Value For Your Capps