No one is talking about it, but it exists. The deadly, cunning creature waits for its unknowing victims in one of the most picturesque areas of the world, and yet we go about our everyday lives as if the very real chance that we may next feel its wrath does not matter to us. The Giant Deadly Kamikaze Black Forest Trail Snail is very real, and every bit as dangerous as its name implies. This lethal scourge of the Black Forest lies in wait now for the unsuspecting and uneducated. Which is why I have decided to come out and tell my story. Despite the risk of further danger to mself.
Travelling in the charming city of Frankfurt, I decided I wanted to bicycle through the Black Forest because, well, . . . I would get to bicycle through the Black Forest. Which would, of course, make me cooler than any of you out there who can't claim to have bicycled through the Black Forest - which I have done, making me cool. Granted, I was already cool after cruising down the Rhine River and seeing more castles than exist in Iowa, Nebraska, and England combined. Well, not sure about England, but Iowa and Nebraska for sure. Let's just say there were a lot of castles. I was already super cool because I had ridden a bicycle on the Autoban in Frankfurt. This coolness diluted a bit, however, because I am pretty sure I wet myself a little when I realized I had accidently ridden my bicycle onto the Autoban. This may help to explain my desire to bicycle somewhere cool without wetting myself. Thus, I started out my journey, with little more than a bicycle and a healthy determination not to crash it.
The Black Forest of Germany I should admit ended up not being quite the mystical fairytale place that legends make it out to be. The Black Forest exists in the real world as a rather large mountainous area of the proper climate and population of trees to qualify for its "forest" status. But if you expect to reach a clearly defined border with an elaborate, forboding gate with a weather worn message warning "You are about to enter the Black Forest. Proceed at your own risk!" you will be disappointed. I know. I was shocked too. I simply went right into the woods with no fanfare or survival advice at all. I received more cautionary words when I hiked into the woods as a kid in central Illinois when Farmer Bob told me he would tell my parents if I trampled his corn again.
Still, once you get into the Black Forest region there exist places where the atmosphere and scenery prove every bit the eerie, but beautifully dream-like fairytale land you expected. It becomes hypnotic at some point. You can only witness a limited number of postcard villages, imposing castles, mysterious abandoned water mills, and awe-inspiring landscapes before you begin to feel impervious to the dangers of life lurking out there. That is precisely the moment they are waiting for.
The Giant Deadly Kamikaze Black Forest Trail Snails hide in the shadows waiting. Watching for the rider so enmeshed in the beauty around them that they possess no hope of noticing the massive, slime coated blob of death as it leaps out from behind the foliage in front of you.
Riding through a heavily forested area, with ancient, gnarled Hazel and fir trees on each side of the path decked out in their dark moss finery, arms held high and in such multitude that only the most determind rays of light manage to fight their way to the forest floor to create that illusion of riding through an endless tunnel. Your mind engrossed in imagining the infinite possible horrors or rewards that may exist if you ever find your way through to the end of this natural tunnel directing you into some ethereal new and exciting future, you are totally unprepared when you suddenly find yourself floating through midair. So deep in fantasy that for a moment you might be flying, you look down and see your bicycle tumbling along below you. Then you land and the final vestiges of the dreamworld disappear in an abrupt burst of pain.
You crawl back through the wreckage of the bicycle determined to find the evil culprit. There it is. The remains of the Giant Deadly Kamikaze Black Forest Trail Snail lie at ground zero. The shell must have been three inches tall and designed over millions of years of evolution to abruptly halt the forward progress of the front wheels of bicycles. Be wary. Their own survival means nothing to them. They could be reading this now and plotting their revenge against "the cyclist that survived." But I could no longer keep silent. Now I have to find another means of making myself super cool without wetting myself. 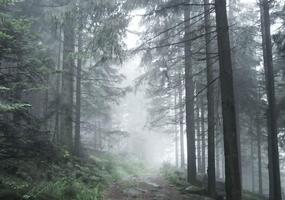 ​Evil At the Heart Of the Black Forest