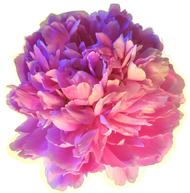 ​A Chalice Most Holy 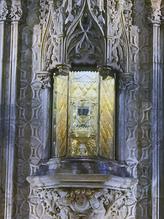 There isn't much left in this world to say about the Holy Grail. It has been done in every way possible in every genre for a really long time. Books and movies, plays and mimes - although even the best mime sometimes struggles to fully differentiate that moment of redemption when drinking from the Holy cup to that other pantomime standby of "This is the best mojito I have ever tasted." Thus, I rather expected being in the presence of the Grail to feel like the anticipation of that first bite of your 1 millionth bowl of Corn Flakes. It was almost a joke. Like, wouldn't it be funny if we went to see the Holy Grail?

Yet sometimes life likes to catch you off guard and throw inspiring experiences at you when you least expect it. We stopped along Interstate 80 near Omaha one time to get a photo of the world's largest ball of stamps because who wouldn't appreciate the comic genius of pretending you drove across half the country to view the world's largest ball of stamps? Then while there I began to read the story behind the residence of Boys Town who created it. Discovering the story of Father Edward Flanagan and exploring the place where he created a home where these orphaned delinquents could thrive and inspire and influence the entire world, all while finding the time to create a roadside America highlight turned a silly pitstop into a spiritually uplifting experience. Walking into the small chapel that houses the Holy Chalice creates that same unexpected feeling.

This sojourn into the Valencia Cathedral and home to the Grail was actually my fourth time into the church, but first time possessed with the knowledge that Jesus stored his old wine goblet here - as I mentioned before. And sadly, I nearly missed it again, as we walked the entire circle of the gilded decadence of the cathedral's main sanctuary, searching the glitz filled alcoves and golden shelves of glittering relics for some sign of the Holy Grail's whereabouts. Eventually we decided to accept defeat and go drown our sorrows in more gelato and coffee. Heads down and shoulders slumped in failure, we shuffled out the front door. I glanced back at the magnificent beauty of the cathedral and there it was. A large poster set upon the wall as you enter the cathedral featured a photograph of the Holy Grail and a clear arrow pointing to the right. Could this be the sign we had been looking for?

With trepidation, but renewed hope we reentered the building. This time taking the advice of the arrow and heading straight to the right we discovered there existed a small doorway down a quiet shadowed hallway. I walked through the door and something changed.

It wasn't something dramatic or that I can even pinpoint exactly. One moment I was in Valencia, Spain where there was a giant party going on. There were fireworks and the streets were filled with revelers. There was a huge and beautiful cathedral filled with gold and opulence and admiring tourists snapping photos. The next moment I found myself in a tiny, ancient chapel filled with virtually nothing except for a palpable stillness and the sound of introspection. People who only moments before were chatting and laughing would enter and succumb to this same calm and tranquility. While the rest of the church was teeming with beautiful artifacts, this room had but one -- a small cup behind a glass case in a stone wall. Solemn and simple this cup remains despite people's attempts to make it look more regal and religious by adding golden bits to the plain agate cup.

Simple stone pews in the center of the room held up a handful of people staring forward. I sat down without realizing I was doing so in one of these pews near the front and let out a sigh that contained more spiritual than physical exhaustion. A young man walked to the front and kneeled on the stone floor. Even from behind you could see that moment when he swallowed whatever it was that he was holding back and let the feelings overwhelm him. Others stared transfixed ahead or looked into the floor with mist-filled eyes. An elderly woman prays, her lips moving in silent penance. A young girl with a couple of children walks in, she bends down to quiet them, but there is no need. They are mute as the rest of us. There is a sense of peace and love when you are in this room and everyone seems to feel it.

I don't pretend to know what it was about this space. Even if it truly is the "Holy Grail" I don't know that Jesus imbued it with some superpower when he drank from it like when a person is bitten by a radioactive rabbit. Perhaps centuries of people coming to this place searching for answers or looking for peace have altered this room and filled it with the essence of the best of what it means to be human. Each person comes in, takes a little bit of this needed energy, multiplies it and leaves more behind for the next pilgrim. Perhaps the Chalice is some kind of conduit for goodness and healing. Or perhaps it is us. Perhaps we are, in essence, conduits for goodness and all we really need is for something to remind us of this from time to time. Sometimes that something may be an agate wine goblet about whose past we wonder. This alone is enough to make it special, and magical, and Holy.