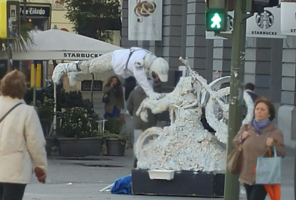 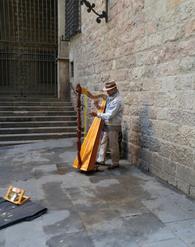 There exists in Europe this subgroup of the population that possesses a largely untapped source of skills which could easily be transferable in American society.
They are multilingual, possess great sales skills, fashion sense, entrepreneurial spirit, and astounding work ethic. Further, they are available and anxious to put these skills into whatever they do. Who is this untapped populous? Europe's homeless.
Never have I seen such hardworking people. Not content to sit and beg quietly, they surprise by developing countless survival techniques demonstrating their entrepreneurial spirit. I can't even comprehend how a homeless beggar comes to possess a full size harp or where they keep it. Nevertheless, they carry it on and off subway cars and entertain with a melodious sound that in all honesty seems a bit wasted in a subway.
I have listened to hobos share an oratory address far exceeding the public speaking abilities of most politicians . . . and they then could translate their own speech into multiple languages.
And the sales skills are crazy. I can only assume that the European homeless attend regular sales conferences. Complete with a lengthy internship program to hone their technique.
As far as the fashion sense goes, I think it's just because this is Europe and even the homeless here are better dressed than 95% of Americans.
So what I am proposing is an exchange program. Not America's homeless for Europe's; that would solve nothing. My plan is to trade some of the people who are a useless drain on society. I know a lot of you are thinking, oh good, she's getting rid of people on welfare. Granted, that is a part of it, but there are other huge, useless financial black holes and the worst of them reside in corporate America. We have all worked with that guy. You know, the one whose sole talent seems an inexplicable ability to get promoted while doing nothing and contributing less. You're thinking about them now. The COO, Chad from HR, or Denise from marketing, or Frank who works in IT but has yet to manage to send out a legible email. Oh, and all politicians regardless of party affiliation.
So let's make the exchange. America's capable of working, unemployed, non-working, money-sucking leaches and America's capable of working, employed, non-working, money-sucking leaches in exchange for the best and brightest of Europe's beggars. But I'm a compassionate person; we can ship the politicians over in cardboard boxes. That way they will have someplace to live when they get there.