​The Land Flowing With Milk and Chocolate

​   The holiday season is quickly approaching and I understand a few of you have yet to purchase your tickets to Europe. This represents an unconscionable form of self loathing. I recommend you correct this action post haste, because the Christmas Markets will begin soon. And Christmas markets mean goodness and fun . . . and, of course, chocolate.
When I say chocolate, I don't mean in the sense of "Belgium makes good chocolate."  Which they do.  Nor am I referring to chocolate in the definition attributed to the phrase, "You Americans are such gluttonous, fat, chocolate-obsessed slobs."  Which you are.  The reason you should venture to Europe over Christmas time is because chocolate becomes an all consuming, almost spiritual event.  It is like going to Pizzafest in Naples, Italy.  Or the Maine Lobster festival.  Or the Roadkill Cook-Off in West Virginia.  Or, perhaps, the Rocky Mountain Oyster Festival in Montana.  The foods transcend the events themselves.  Lobster in Maine doesn't just happen to be served there because there is a festival taking place; lobster is the festival.
In December in Europe chocolate becomes Chocolate.  A lower case "c" simply can't hold up any longer as Chocolate becomes a vast, all-encompassing entity.  Proper noun Chocolate wants you, and it won't be sated til it possesses you fully.  And it will.
When I went to Europe my opinion about chocolate could be described as apathetic at best.  I didn't dislike it, but my indifference caused confusion, if not outright animosity among friends.  "How can you not like chocolate?  What is wrong with you?"  Followed sometimes by, "You sick pervert!"
"How can you not like Brussell sprouts?"  I would counter to further alienate those around me.  Who would then grab their children protectively and shepherd them away as if I were contagious with something deadly and unpleasant smelling, leaving me to feel like an outcast in a world of chocolate lovers.
Then I undertook a tour of European Christmas markets.  I have previously attempted to describe the indulgence, gaiety, and holiday cheer of the markets in cities like Brussells, London, or Prague.  To sum it up in one metaphor: Picture the trailer in the trailer park in your home town with the $2000.00 December electric bill and the angry neighbors who haven't been able to sleep due to the super novaesque light burning through their closed eyelids from the roughly 1 million Christmas lights on the trailer down the street.  Now imagine that person has an unlimited budget, an entire city to work with, . . . and good taste.  That is what the Christmas markets are like.  And permeating through all of this, is Chocolate.
Chocolate waits to rule you.  I don't know if Chocolate is a force of good or a force of evil.  It desires to either enlighten or enslave you, but either way, it will have you.
Innocently, you walk into one of the enchanting chocolatiers in Brussells - just to look around.  Then you see Chocolate.  All around you, in more beautiful shapes and colors than you realized chocolate could take - in more hues and incarnations than you ever knew that anything on Earth could take - Chocolate flaunts itself.  Like a siren from the sea it calls to you.  Then the aroma hits you and for a moment you forget who you are or how you came to arrive here.  Only Chocolate matters.
Then one of Chocolate's acolytes appears.  Smiling her seductive smile and speaking in her alluring sing song voice she intones, "Would you like to sample some Chocolate?"
You can only nod.  She opens the magical golden treasure chest that suddenly appears before you, and you peer into Nirvana.  More manifestations of Chocolate rise up than could physically fit inside this small box, but you choose to ignore the warning signs.  You watch helpless as you see your hand reaching out of its own accord to lay hold of a piece of Chocolate that resembles a silver, metallic prism.  You have no recollection later of the prism being placed upon your tongue; you simply recall a flavor assault that caused an abrupt ceasing of all rational thought.
"Try another."  The melodious voice lulls you, and again, you merely nod and obey.  Followed by another, and yet another.  Glorious nuggets of Chocolate are now bombarding you from all sides.  "Yes, yes.  Let the Chocolate flow through you," a lilting voice suggests seductively.  Dark Chocolate.  Milk Chocolate.  Fruit-infused Chocolate.  Chocolate containing every nut imaginable.  Lemoncello Chocolate.  Chocolate marzipan.  Caramel, toffee, coffee.  The flavors go on and on.  Chocolate bars, Chocolate bricks, Chocolate flakes.  Chocolate shoes filled with Chocolate pieces.  Chocolate Titanics, Chocolate cathedrals, life-sized Chocolate nutcrackers.  Chocolate rivers flowing from Chocolate fountains and drizzled over Belgian waffles filled with Chocolate.  The madness continues in every store and every stand in every city.
Free samples were shoved down my throat by servants of Chocolate in an attempt to make me one with them.  Dealers of Chocolate yelling, "Hey kid, first one's free."  Each time I succumbed to the temptation I could feel my resistence slipping a bit further away.  But I persevered.  I escaped the onslaught converted, but not enslaved.
So I now invite you to come and partake in this Chocolate ritual yourself.  Come on, friend.  It's safe.  No pressure at all.  And remember, the first one's free. 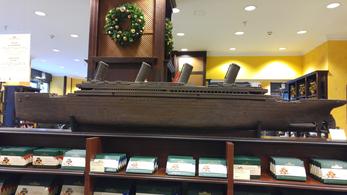