Poor example of a street performer.  Too many props.  Plus I would avoid any street performance that involves hanging motionless in mid air for anything longer than three hours. 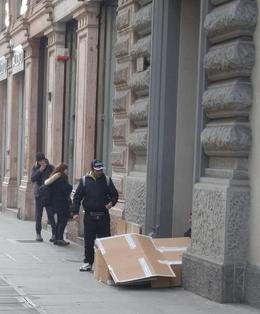 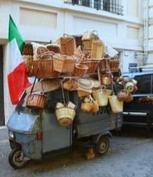 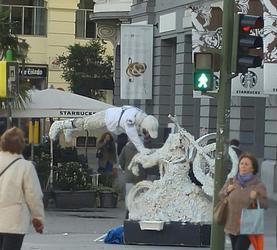 ​   I realize there already exists a glut of travel advice out there on what to pack and how to travel light and how to be as cool as me because I got drunk in Laos - okay, this last one is unrelated and only to be found in the writing of particularly pathetic, desperate for attention losers.  What I have yet to see is a useful bit of advice on how to explore the world with no luggage whatsoever.
It's not really as difficult as it sounds.  Homeless people do it all the time .  When was the last time you saw a hobo lugging around a steamer trunk?  If a homeless drifter can survive with nothing - with their questionable decision making skills and poor connections - how much easier should it be for you?
Why would I want to do this, you may ask.  The advantages are innumerable.  For one, fear of being robbed or assaulted becomes a non issue.  The second most common fear people suffer from when travelling - according to Quite Possibly Untrue Facts - is the fear of being mugged.  Number one of course, for the 5th straight year, the fear of being buried alive in quinoa with a zombified Alex Trebec.  Having no possessions reduces the odds of mugging by over 20% and of the muggings that do occur duration time is reduced by 90% - again statistics from Quite Possibly Untrue Facts.
Without possessions you have more time to enjoy travel.  No clothes to change into means none of that annoying "What should I wear?" time.  No time spent changing, primping, or oral hygiene.  Just pure exploration.  Plus, keep in mind that significant time without these vacation-consuming chores results in still further reduced chance of assault.  Think of your appearance and aroma as a friendly security guard keeping all human danger at bay.
Another great benefit is you never have to feel that sense of panic when you think, "Oh no, did I forget to pack . . . ?"  People with valuables live in a constant state of stress and worry over where those possessions reside from one moment to the next.  The luggage free vacation liberates those in bondage to their things.  Imagine an existence no longer under the thumb of a toothbrush or the totalitarian rule of a roll of toilet paper.
Think of luggage free travel as a Paleo vacation. One of those if I refuse to part with this rock shaped like a chair, I may be eaten by a dire wolf, type of caveman experiences. Because if there is anything we have learned from a diet named after, but in no way resembling that of paleolithic man, there is no life style healthier than that of the caveman. Primarily this means living a life free of possessions and social media, and a diet heavy in mastodon meat.
There exist those naysayers who claim nonsensical things like, "Doesn't this way of travel make you essentially a homeless vagrant and freeloader?" To those I say, "Just shut up!" Then sometimes I cry because my feelings get hurt easily. But the over riding point is if you are one of those people who feel like you have to put a label on everything then you are clearly too uptight to begin to appreciate the subtle nuances of this up and coming brand of travel anyway, so, "Just shut up!"
While I could go on forever about the myriad brilliant reasons why stuffless travel makes sense, we really should leave the land of "why" and delve into the more subjective world of "how."  Time permitting we may journey into the vast eerie and mysterious jungles of "which," but for now let's focus on how.

How to pack for your journey:
Step #1:  Take out a medium sized suitcase.
Step #2:  Put all your preconceived notions of travel in it.
Step #3:  Zip it up and set it on fire - you won't ever be needing it again.
Step #4:  Put out the fire before it gets out of control (if necessary).
Where to sleep:
This really is kind of a silly question.  All one needs to enjoy a comfortable sleep is a horizontal space large enough to contain the length and width of your body.  Look around you.  The world is filled with suitable locals that meet these simple requirements.  If you get confused, follow a homeless person around until they pass out from exhaustion; then just copy them.
How and what do I eat:
Food, like lodging, has become far more complicated than Paleo man would have ever believed possible.  If an object possesses nutrients and no toxins eat it.  In our complex, uptight world we have become so overly concerned about trivial details like:  I wonder how long that half a sandwich has been sitting on this park bench. Or:  I wonder if this possum died of natural causes.  Quit worrying, take in some calories, and get back on the road.

What if I have a disease for which I require medication:
This, I will admit poses a bit of a conundrum - mostly because I like to incorporate the word conundrum into writing as frequently as possible - but there are a couple of solutions.  Probably the best, because it works as a long term solution, is obtain a miraculous healing before your departure date.  Choose a religion with a god that seems pretty laid back for a better chance at healing based simply upon a desire to travel without carrying a daily pill organizer.  A lot of gods tend to get snippy when asked to perform miracles for, what they consider, selfish reasons.  Avoid those if possible.  If time constraints require you to seek out Chinnamasta, for instance, who is obsessed with self sacrifice, I am not suggesting you lie to her about why you desire healing, but you should probably lie to her.  Of course, if you mention my name to her as suggesting it I will vehemently deny everything.

What if unforseen circumstances arise where I require money:
If a situation arises where financial means become a necessity there are a few options.  While I would never condone stealing money from anyone, getting them to give you some is a perfectly acceptable means of earning it.  My suggestion: it might be advisable to learn and perfect a street performer trade before setting out of your journey.  Obviously nothing requiring props.  No playing of musical instruments or juggling prairie dogs.  Singing is a bad idea, as well, because no matter how melodious your voice, the effect of standing on a street corner singing to yourself is the same as standing on a street corner talking to yourself.  So remember, you want to attract a crowd, not repel one.
Miming, on the other hand, is an excellent choice.  Being trapped in a box requires no actual box at all.  And all those old school doctrines of black clothes and white face paint are now considered passe'.  Today's modern mimes no longer subscribe to the slavery of archaic rules of mime behavior.  I know it is hard to believe in this accepting and open minded society, but at one time it was considered inappropriate for any self respecting mime to strip down to their scivies and hump an imaginary dog.  But these days that routine is one of the most popular schticks in Paris.  At least I assume those people were mimes.  It's so difficult to tell these days because the mimes are all wearing regular street clothes.
If you are a juggler and wish to incorporate this talent into your routine that is fine.  Just remember that you will be forced to juggle things available on the street.  This can be unpleasant - particularly if you choose to perform in the Red Light District.  Sometimes viewers will contribute items for you.  Keep in mind, however, two or more babies juggled at one time can be an impressive act, but be very confident in your abilities, as this could result in poor wages and potential beatings, but perhaps free lodging.  And free lodging fits in well with our plans any time.
So just imagine it.  Travelling the open road, unburdened by all the material garbage holding back everyone you pass.  Revel in their envy as they notice you saunter unencumbered by.  And notice you they will.  You will be the one who hasn't bathed or changed in weeks.  Oh yes, they will definitely notice you.

Cardboard tends to be easy to come by and makes for excellent temporary lodging. Think of cardboard an old, reliable friend.