A wise and thought-provoking person corrected me today while engaging in an atrocity for which I confess being guilty of my entire life. Not saying it is a significant practice of my daily life, per say, but I have never before thought twice about it. But no more. I speak of the thoughtless and life-threatening act of skipping stones.
The beaches here in Vera, Spain abound with the most perfectly formed skimming stones: a constant temptation amongst those of us not averse to the occasional skipe. Up until the moment this enlightened citizen for change made me aware of the danger each time i recklessly skip a stone over the water I never even considered the implications. Which I must admit were not immediately apparent to someone of my limited cognitive abilities.
In fact, I believe my first reaction when informed of it was dangerous amounted to, "What?"
"There are living beings out there," she explained with uncanny patience for a wise, cultivated mind dealing with a barbaric oaf.
"You think Squidward is going to come up to see what all the ruckus is and take a rock between the eyes?" said the barbaric oaf.
Perhaps my first impulse failed to recognize the gravity of the situation which may explain why I chose Squidward over some more lovable character like Nemo, Flounder, or Charlie Tuna. Or that could simply be that special place I will always have in my heart for Squidward.
I have thought about it and acknowledge the concern of someone who could have been an angel sent from heaven to teach me the way. Except an angel would have then disappeared instead of continuing to lay like a slug on the beach glaring at anyone who passed by with an air of superiority. Knowing what I do about sea creatures and their habit of floating on the surface of the ocean for long periods of time and a morbid curiosity for all things rock I am embarrassed how long it took for me to repent my ways.
To make amends and, hopefully, undo some of the wrong I have done I have written this little public service announcement:
Each time you skip a stone over a body of water think of the many lives you endanger. Not just the life of the fish you may hit, but what if that fish is a mother. Think of her babies awaiting a return never to occur because YOU just had to throw that rock. What if it were your mother floating there? Which, granted, probably wouldn't happen because your mom isn't a sea creature. I am assuming this because you would therefore be one as well and not reading this as the internet is still a couple of years away from reaching the depths of the ocean. But hypothetically, what if?
As many as two fish a millennia could be killed as a direct result of the senseless, primitive practice known as skipping stones. With your help we would like to cut those numbers in half over the next millennia.
I hope my brave and soulful "angel" may find this one day and know how she touched at least one life today. I know it is asking a lot, but I pray, perhaps, she can find it in her heart to forgive me.

​Peril Upon the Not So High Seas 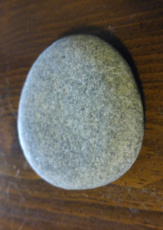