Love At Almost First Sight In The Amalfi Coast 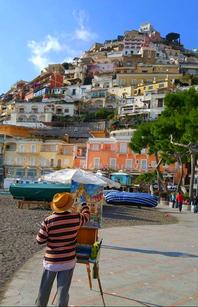 The rest of us stood in shock and stunned silence a moment, which was finally broken by lucky man, "Well, that was close. He almost got me."
"What do mean? He did get you," one of his friends observed and everyone began to laugh. Unlucky man, already reduced to an unpleasant memory, all but forgotten.
Lucky man continued across the street still laughing and smiling. A few minutes later he came back out and the smile was even larger. Held aloft in his hands he carried a large wad of bills, the winnings from the last scratch off ticket. We all cheered and congratulated him. That evening lucky man laughed, partied, and enjoyed the company of people he cared about. Unlucky man continued to complain and rant about the idiot that ruined his day and probably his entire trip. Lucky man now possessed a funny story to tell in which unlucky man became a little more than a punchline. Unlucky man, the victim as always of other people, came away from the incident with something else to hold bitterly like a tiny treasure of misfortune in his heart. Even without the winning lottery ticket the story plays out basically the same way. But I think the money was a nice touch.
Lucky man symbolizes to me all the best of Positano and really the best of mankind in general. For him this world is a place we journey through with others. We discover people with whom we make connection as we go about looking for the beauty and joy in life. Simple pleasures, enduring optimism, and that gift of spreading happiness to those around you. Like the children running after the birds on the beach, laughing without restraint, Lucky Man goes through life. A wondrous life in a beautiful place where he can always find someone who can make him a sandwich.