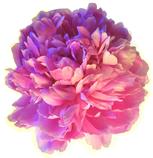 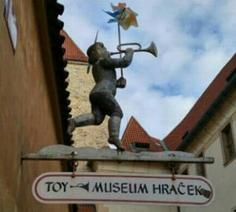 Dark Secrets in the Toy Museum of Prague

​  Prague may not have everything you are looking for in a city.  It falls way down the list for me in great Sri Lankan restaurants, for example.  Don't expect to experience the awe of observing herds of zebra and elands galloping across majestic plains here either.  I never saw a single Disney theme park in the entire city; and, quite frankly, the snorkeling sucks.  But there is one area where Prague excels far above the rest - well, aside from being the most beautiful and amazing city ever:  Prague possesses a top notch, life-size Jar Jar Binks.  So suck on that Orlando.
Where,  pray tell, I can hear you asking, is this monument to The Binks - as his legions of adoring fans know him?  Where else?  The Prague Toy Museum.

To find the museum one must face the daunting task of standing in place wherever you might be and rotating in a circular motion until locating Prague Castle.  Then walk towards it.  The Toy Museum is right there next to the castle - in honor of His Royal Binksness, I assume.  Walk towards the castle until discovering the Boy With the Golden Penis.  You have arrived.
The Boy With the Golden Penis I have mentioned before, but warrants repeating.  He hangs out - no pun intended - just outside the museum, because he doesn't have to go anywhere or do anything to qualify as the most successful male ever.  Women of all ages, ethnicity, and socioeconomic status flock to him just for an opportunity to touch his member. The hands of hundreds of women fondling him daily have polished his wang to a golden hue. Directly behind him is your destination.

The museum itself is a shrine to childhood. Scattered around the galleries of this two-story home, entranced visitors will find enormous collections of wood and tin toys, clockwork toys, Teddy bears, trains, and other fascinating and assorted oddities each waiting to flood your with long dormant memories from your childhood. Elaborate displays feature scenes of worlds lost to time. Renaissance cities and alpine villages come alive with so many buildings and figures that you find yourself watching enrapt for a moment, expecting them to move as this might be an actual town, miniaturized and imprisoned behind the glass.

Absurdly, detailed dollhouses straight out of the works of Austin or Dickens give a glimpse into the lives of Victorian nobility down to the most minute detail on the tiniest doily on the least prominent table in every room. Another display holds a circus realistic enough to have fooled P T Barnum himself. Finally, you arrive at a collection of Barbie dolls that takes you through over a half century of Barbie evolution.

But it is not simply the happy, innocent childhood our grandparents like to tell us about when they aren't regaling us with stories of how they nearly died every day enroute to school, but all childhoods that are on display here.  This includes the dark, disturbing childhood of the early to mid 1900s.  The childhood designed to make you grow up fast and get your ass out there working .  A nightmare inducing childhood that turned impressionable minds into sadistic, bigoted potential sociopaths.  At least I assume that was the plan.  How else does one explain the horrors of the toys from all over the globe that reside here?
If you are a Charlie In A Box or a Cowboy That Rides an Ostrich a visit to the Prague Toy Museum - aka: the Island of Misanthropic Toys - will make you feel quite good about yourself and your lot in life.  What childhood traumas occurred in the life of the nefarious creature who felt that the formative years of development needed the military hospital play set I can't imagine.  I am not sure as a four year old our fantasy play world necessitates the inclusion of scenes of brutal, anasthetic-free amputations.  And don't get me wrong, I am fully in favor of embracing the legend of Krampus in your Christmas activities.  I believe every child should understand the darker half of Christmas and the consequences of being bad little girls and boys, nevertheless, giving a toddler a Krampus doll seems a step over the line of good taste to me. Still, this makes more sense than the displays of trees of Christmas past adorned with the creepy disembodied heads of vacant-eyed children and the occasional arthropod.  My guess is that the story of The Prawn That Saved Christmas has simply been lost to history, but was a tender and beautiful tale of seafood redemption in its time.

There exists a certain nostalgic quality to seeing toys you remember playing with as a child.  In one way there is a beautiful innocence to viewing these toys that don't plug into a wall or require two D batteries to work.  Old tin toys with a simple metal key you turn to take you to the circus or for a ride in an old Model T.  A less harried, complicated time when a trip to the local candy shop or a romanticized vision of life as a princess brought you all the happiness you would ever need. Happy thoughts of a lost time when people learned to enjoy life without the immediate gratification of everything being available at the push of a button.  All protected and watched over by the universally beloved, His Most Honorable Jar Jar.
However, The Toy Museum also takes you back to that pure, wholesome, happy time of which people like to reminisce when Native Americans were blood thirsty savages scalping white women, black people found fulfillment in their life of slavery and women's heads weren't filled with silly thoughts of an existence outside their homes and the dictatorial rule of their husbands.  To me the Toy Museum may represent the most profound look into mankind's history - the good and the bad - of any museum I have ever seen.  Toys represent what human beings desire their offspring to find value in.  While history is written from a biased perspective in an attempt to display our own actions and beliefs in the best possible light, the toys we give our children contain the true history of our lives.  A father gives his son a baseball glove because he values sports and wants nothing more than to see his offspring excel on the field.  A mother believes becoming a good cook will enable her daughter to procure a better husband and therefore buys her a toy stove to practice on.  Not sure I want to see into the mind of the parent that buys their child a figure of Frankenstein's monster with his pants around his ankles.  But the more I think about it, I think I might have enjoyed spending time with the woman who gave her progeny the cute little dolly possessing a tale like Satan.
The Toy Museum teems with mysteries, treasures, parenting sins of yore, and, of course, Ken dolls depicting Donald Trump. A shrine to childhood dreams worthy of a visit both for for the charming nostalgia and the largely unintentional historical rendering of human kind. For it is the playthings of our youth that help define who and what we become. This is our true history and it is on display - the good and the bad - here in Prague.