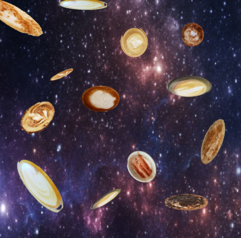 Scientists will tell you that time travel doesn't exist. They tell you this because they are scientists and consequently the types of people that adhere to such fun and fantasy killers as truth and fact. The great thing about science, however, is that if new evidence comes along to disprove previous beliefs, science alters its beliefs. (Unlike the general population, who will defend their own personal viewpoints against all reason and sanity.) Well, I am prepared to present science with a new hypothesis on time travel. My evidence to support my research -- a grande pumpkin spice latte from Starbucks.

Let me assure you, I am not new to Starbucks pumpkin spice latte. In fact, I have been in a long term relationship with Starbucks for decades. Mind you, this is an open relationship. I am allowed to see other coffee shops and Starbucks is allowed to quench other thirsts. We have been together since the very beginning. I actually remember him back when he brought me the immense pleasure that was the Café Valencia, an orange flavored coffee, and, in fact, we nearly broke up over its disappearance from the menu. Still, I felt the relationship was worth saving and he discovered other means of satisfying me that weren't dependent upon a hint of citrus, which he could no longer provide. He broke out the most important of these new pleasures back in January of 2003.

Back in those post-Victorian days, pumpkin spice as a flavor was limited to, pretty much, pumpkin pie. I know today in our enlightened society it is difficult to imagine a world void of pumpkin spice hummus or Pringles and completely sans pumpkin spice dog shampoo, but this was the dark ages. The Y2K disaster was only a couple of years behind us and the fashion debacle of the 1980s was still fresh in many people's minds. Bragging rights abound when you purchased a Nokia 6610 and there was still hope for the redemption of the Star Wars franchise. People not only knew who Andrew Keegan was, but actually talked about him around the water cooler. It was a dark and non-descript time. Thus, it was quite fortunate that something world altering and life changing was about to happen.

Difficulties present themselves when faced with the task of describing a moment in time that improved forever the lives of an entire species without sounding overly dramatic, but I shall attempt to do so. The first time our tastebuds were submerged under a wave of pumpkin spice latte each of us knew we had been born for this time and this place. We mourned for those who had gone before us and would never know this joy and rejoiced for those who would come after and never have to live in a universe devoid of the promise of the coming of an annual rebirth of ingestible Shagri-La, Nirvana in a cup. Who knew that such simple, wondrous pleasure could be derived by pulverizing the flesh of an orange gourd that works nights as a monster's head.

For a chapter in our lives all was goodness. But, as with so many wondrous new discoveries, the passage of time began to chisel away at the pumpkin spice latte. Baristas became lazy, the pumpkin flavor began to ebb, and often there lurked bitterness -- both literal and figurative -- in your cup. I continued to frequent Starbucks for its other fine selections as I have always considered Starbucks a beacon of hope to weary travelers. But years passed and sometimes I rarely even bothered to order the item that once changed my world. I sampled pumpkin coffees from other coffee establishments, sometimes pleasantly surprised, but more often disappointment ensued. Alas, there never surfaced anything like the mould from which an obsession was born. Excitement waned and expectation diminished. Until today. Or perhaps I should say yesterday, or untold numbers of yesterdays. For today I strolled unsuspecting into a Starbucks in 2019 to find myself in 2003.

The young girl behind the counter did not appear to be a time traveler, although the pink hair marked her as more interesting and adventurous than most people I meet, and she exhibited a friendliness that a person suffering from paranoia might consider suspicious. Unaware of the possible dangerous implications of what might come next I ordered a pumpkin spice latte. A few minutes later she handed it to me with a smile and I walked outside. I raised the cup to my lips, lacking any real anticipation, and took a sip.

I don't know the actual physics behind what happened next. I do not recall traveling through a wormhole nor flying around a Tipler cylinder, or even falling asleep in a hot tub, but I found myself back in 2003. Suddenly trees that existed back in the early 2000s stood before me. Granted, those same trees are still there in 2019, but only an unimaginative skeptic would ever point that out. Andrew Keegan didn't come out and perform magic or start flamenco dancing or whatever it was that he was famous for that one week, but I might have heard Clay Aiken on the radio. And the delicious flavor of nostalgia and the scent of rapturous memories was unmistakable.

For the next several minutes I basked in the joy these fond remembrances held. My younger self, reminiscing of those long gone days, found the glimmering embers of a few repressed, abandoned dreams. As the last drops of the coffee disappeared, the world of 2003 shimmered for a moment and then was gone. The trees of 2019 came back into focus and the vision became but another memory.

I walked back in and told her of the journey through time I had just been on thanks to her barista skills. She confided in me that her secret ingredient is the extra love she puts in every cup. I have no doubt this is true for I could definitely detect the flavor of love in every sip, but there were hints of the laughter of children and notes of Christmas spirit as well. So I am certain she is not divulging the full recipe. I thanked her for the experience and she winked conspiratorially. "Don't forget what you have witnessed here today," she didn't tell me. Of course, she didn't have to.