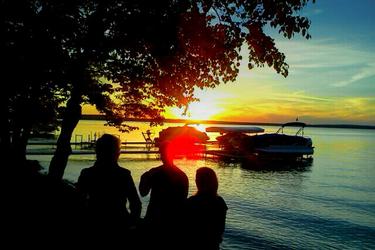 ​   ​  About a decade ago the state of Michigan decided to stop diluting itself down with other states and become pure.  A marketing campaign reflected this newfound concept and "Pure Michigan" mania spread through the Mitten and UP like an STD on a college campus in the Bible Belt.  Now this brilliant marketing idea has begun to tear across the rest of the country, as well.
Michiganders who have never ventured beyond the confines of the state have been "Smitten with the mitten" for awhile now - perhaps because they have never set foot upon any other ground before and aren't certain any other landmass can support their weight - but now that Michigan is pure they find themselves absolutely enthralled by the results.  Loyalty to an a arbitrarily defined piece of land has never before been this popular outside of Texas.
For outside visitors it should be noted that entry into Michigan has become significantly more difficult as border crossing now require a sterilization process for both travellers and their vehicles to ensure that any stray bits of contamination from neighboring states not enter.  The national border is less of a concern as Canadian soil remains so non-descript as to prove nearly indistinguishable when mixed into the soil of any other terrestrial location.  Also important to remember is any waste products or hair be sealed into airtight containers and remain with you during the entirety of your visit.
Check points have increased in the last few weeks as rival state Ohio recently came dangerously close to setting back the Pure Michigan campaign when a group of interstate vandals were intercepted at the border carrying an entire trunk full of 100% Ohio.
Other states, in an attempt to jump on the Michigan bandwagon, have come out with their own ads.  Unadulterated Rhode Island and Untainted Nevada have experienced limited success to this point.  While Non-Polluted Kentucky has just been launched and Virginia-Free Arizona recently became Unscented.
Michigan, however, clearly possesses the advantage over the rest of the country as they began their purification process years ahead of everyone else.  The painstaking system of identifying and removing stray particles of the rest of the world from within their borders complete, they can now just sit back and reap the benefits of being all Michigan, all the time.  Tourists can rest assured that when they go fishing on one of Michigan's countless scenic lakes that the fish they catch are Michigan born and bred and will, therefore, deliver that pure Michigan flavor.  Unfortunately, the same cannot be said for the Great Lakes, which are shared with other states and Canada, and the creatures that dwell within their frigid depths show no obvious state loyalties and could potentially taste like Indiana.
But as long as you remain within the confines of the state, feel confident in the fact that everything you come in contact with has received the 100% pure Michigan guarantee and seal of approval.  So leave your state behind - where it belongs - and come enjoy Pure Michigan.