Let's face it. No matter how hard you try, some days you are simply going to be stupid. When those days happen you will ideally inhabit a place and time where the minimum amount of damage can occur. If you knew ahead of time that your decision making skills currently traversed an all time low you could lock yourself in your room and, if possible, chain yourself to the bed like a lycanthrope on the final day of a gibbous moon phase.
At the very least, you would make certain not to put yourself in a situation where you may end up chasing a bus through the rain in Calais, France at 3 am to retrieve your possessions before it boards a ferry for England so you could continue your interrogation by the customs agent who hates you with a passion bordering on madness.
Unfortunately, current software for predicting stupid days are still in their infancy and unproven so I awoke clueless on that morning in Paris unaware that doing so was the first of many mistakes. I somehow remained unaware when I bought my subway ticket, dropped it down a sewer drain, bought another, got on the wrong subway, bought a third and finally sprinted to the bus stop just in time to discover I had purchased the wrong bus ticket in the first place and wasn't leaving for another 8 hours.
The next several hours were happy ones marred only slightly by the cappuccino I poured down my shirt when I missed my mouth by a scant 3 or 4 inches and the moment when I tripped up some stairs and somehow managed to kick my shoe off into the midsection of the elderly woman behind me.
Eventually I made it onto the bus and sat next to an older, bearded gentleman who introduced himself as Noah and then proceeded to fall asleep on my shoulder.
We reached the town of Calais at 1:30 am and we were awakened and told to gather are belongings and depart the bus. Now, I realize that it is a meteorological impossibility, nevertheless, I am standing by my story that it was twenty degrees below zero and a torrential downpour. Noah peels himself from my shoulder and exits, mumbling something about an ark. I choose to disregard the instructions to take my stuff as I leave to get my passport stamped. I believe I even made the universally recognized error of thinking, "What could go wrong?"
I walked into the little shack that served as border control and got in line, forgetting to fill out the card and beginning my relationship with the personality lite man behind the desk in the most negative way possible. He then spent the next five minutes berating me for wasting everyone's time, totally ignoring the line of people to do so. When I reached him again he looked at my passport and studied it as if it were encrypted, translated into Sanskrit cuneiform, pulverized in a blender, and then pieced back together by a near-sighted walrus.
He then glared at me and asked me why I was returning to the UK. My naive answer that I like it there was clearly the wrong one and brought about a tirade of inquiries questioning my history, motives, and very humanity. He then opened my passport to my previous UK stamp and pointing explained, "See that right there? That means you have been listed as dubious." Having never before been listed as dubious, I wasn't certain whether to feel flattered or ashamed. I compromised and went with confused.
By this time all the other passengers were finished and watching my interrogation, clearly grateful I had been captured before I could embark on whatever treacherous plan I had come to embark on. I explained to the angry man that I had sold my house, quit my job, and now I was simply exploring the world. A story, apparently, tantamount to confessing my plans to achieve world domination. Finally he says, "I think you can see why I find your story difficult to believe."
"Well, actually no," I responded. "But that's probably because I am a more interesting and imaginative person than you are." After speaking these words out loud, I thought that I was only thinking them.  My thoughts began to race that, I am a woman alone in an unfamiliar part of the world, is he going to turn me over to the authorities to be beaten and raped?
After this our relationship went into a rather downward spiral. The bus was told to go on and I would remain for further investigation. He generously allowed me to retrieve my luggage from the bus. I folded my hands in a praying gesture and thanked him.
I retrieved my backpack and headed back before remembering the stuff I had left in my seat. When I turned the bus was driving away towards the ferry. Racing through the cold and rain I chased the bus to the water's edge, finally catching it and banging on the side of the bus and drawing more frightened stares from the other passengers. A window opened and my possessions were dumped unceremoniously out into the rain because I was clearly too dangerous to retrieve it myself. Waterlogged and covered in a three inch cocoon of ice, I slogged back into the building where I was asked to have a seat.
Morning and another bus came, bringing with it another shift of agents. The man who now stood across from me glanced at my passport, stamped it without question, and instructed me to have a nice day.
I stepped out of the customs building into a bright, sunny morning and boarded a new bus. A dubious woman continuing her questionable journey. 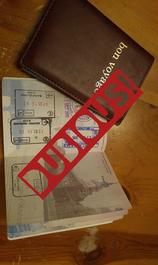