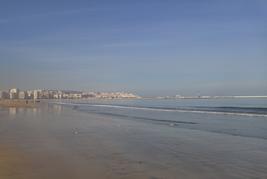 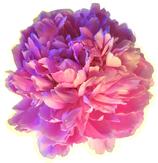 Riding the train though Morocco to Tangier, Morocco, I considered contemplating my journey through this remarkable corner of Africa. I was, however, too exhausted by Morocco so instead sat brain dead, staring out the window and contemplating the many shades of the color brown.
Morocco is the place to go when you feel as if life no longer holds any surprises for you. If you have seen it all and done it all, Morocco is like a reset button for life. A couple of days there make you feel completely clueless, as though you just got out of college again with no plans, no home, and no job and get told, "Okay, here's your life. Have fun." Morocco provides a different way to view the world, but no instructions on what to do with this new insight.
I arrived in Tangiers late at night, planning to sleep in the train station for a few hours before making my way to the ferry and heading back to Spain. Then I walked into the station and thought, "Or, . . ." This "or" had nothing to do with the building itself, which was shiny new and quite nice. It had nothing to do with the people in it either, who seemed rather pleasant. The "or" had more to do with the armed security who ushered us out of the station at gunpoint, because they were about to lock up.
"That's fine," I thought. "I have been kicked out of better train stations than this before." Of course, never train stations in Africa with no plan, no map, and no phone service. I had heard stories of Tangiers and prepared my psyche for a long night perched on a park bench like a frightened chipmunk, defending its last acorn.
Then I walked outside.
My next thought was, "Where the Hell am I?" Followed up by, "Oh, I recognize this place. I am in Miami." Obviously, I had traversed through one of those sci-fi, dimensional portal thingies that links Tangiers Terminal to the southern coast of Florida. This made far more sense to me than the other possibility, that I was still in Africa. Minutes before getting off the train I had been in a land where donkey-drawn carts ruled the road, shepherds led their flocks down foot worn paths, and women sat in fields gathering grain which they placed in heaping piles in large, hand-woven baskets. Then I stepped off the train into the lobby of a resort hotel.
Deciding I deserved it, I checked into the hotel and indulged in the second most welcome and wonderful bathing of my life.  Followed the next morning by an amazing breakfast provided by the Ibis Hotel. Feeling refreshed and satisfied, I ventured out into Tangiers.
The sense of being in Miami began to dissipate gradually. The buildings less grandiose and the people far less outrageous and flamboyant. It was like someone had taken Miami and toned it down and converted it to religion. I began wandering down beaches, beautiful and glistening with multi-colored sea glass, acres of beaches filled with tiny, smooth shards of technicolor that one could easily load in buckets to take back home, if one could carry said buckets of glorious beauty. Once simple garbage, reincarnated and reborn through seawater rehab into an existence of desirable, happiness-inducing, jewelry-worthy joy. Awed and distracted by the wondrousness of the beach I failed to notice when I was spotted and the telepathic announcement was made. "American on the beach!" the signal blared. Locals selling amethyst filled geodes, homemade works of art, ceramics, impossibly colored Djaballas, musical instruments, magnificent pungent spices, scantily clad women showing both eyes and desire-inducing patches of ankle flesh, and - I swear - but cannot confirm, a guy on a flying carpet proffering gold lanterns attacked from out of nowhere. The man on the carpet swooped down, narrowly missing me, as I ran and ducked into a tea shop to escape the growing mob. At this point the illusion of being anywhere other than Morocco shattered apart entirely.
After enjoying a warm glass of Moroccan tea, which is really mint flavored molasses, with just a hint of tea, I thought I was safe and attempted to sneak out a side door. But apparently, a spy working on the inside ratted me out. The entire throng stood silent, awaiting my reappearance. This time there was no where to run. Just as I was about to give up and tell them to take my money and leave whatever they wanted, I was rescued.
Laying supine upon the ground reaching for my money and begging for financial death to take me, I watched as the mob vanished. They scattered like topsoil in a midwestern wind because the farmers there are too stupid to leave a few trees to hold the land in place. I looked up, gasping for breath into the eyes of my rescuer.
To be continued: