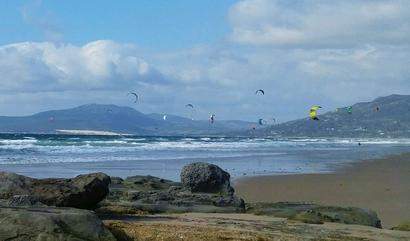 The Heartbreak Of Catching Your Bus

As somewhat of an expert on the art of missing buses I can tell you that oftentimes a failed attempt at making a scheduled departure date can prove quite fortuitous.  One of the most successful bus trips I didn't take occured just after disembarking from the ferry in Tarifa, Spain.  Nearly everyone I had spoken with and most everything I had read advised me that there was no point in lingering in Tarifa.  Simply get directly on the bus and head to Algeciras.  "There really isn't anything to see or do there," was the mantra spouted from the masses.
So, in a rare attempt to be a good sheep, I had every intention of following the crowd straight into the livestock trailer disguised as a bus when I arrived.  However, my resolve began to waiver slightly as the ferry reached port.  There was something about the place.  I couldn't quite get a grasp of the specifics, but it peaked my curiosity as we were escorted into port by the whales that had chaperoned us from Morocco.
I think maybe the first thing that intrigued me was the fact that whales had escorted us there.  Whales, and in fact, no mammalian sea life of any sort had ever escorted me anywhere before at all.  I had a friend once that claimed a narwhal had given him a ride to Decatur, Illinois.  Of course, this story remains unconfirmed, and even he admitted that he was on a pretty righteous acid trip at the time.  So for me, the whale bodyguards felt rather noteworthy.
Then we sailed into dock between a lighthouse and Jesus Christ.  The lighthouse, granted, was perhaps to be expected.  Jesus, on the other hand, standing out on the peer welcoming me back to Europe was a bit of a surprise.  "What are you doing here?" I asked Him.  "I thought You were in Rio."  He didn't respond, of course, because He was just a statue and statues don't typically answer questions.  I thought a statue of Jesus might make an exception, but He resolutely remained silent.  This wasn't your run of the mill, everyday Jesus either, but a badass Jesus with large pecs and a six pack.
Looking past badass Jesus I could see Tarifa.  Castles and city walls with a mountain backdrop made me further wonder why there was nothing worth stopping for.  In fact, it made me wonder it for so long that I forgot to follow the rest of the sheep and went astray.  And Jesus was standing there the whole time.  But instead of coming to my rescue He simply winked at me and gave me the thumbs up sign - which I think is good because we were in Spain and I don't think the thumbs up sign means "up yours" there.  So, with Jesus blessing, as opposed to rushing ahead to catch up with my flock I just sort of moseyed.  Not a Texas mosey where you look as though you have a terrible diaper rash, but a normal, straight-legged, respectable mosey.
Of course, the mosey failed completely to accomplish its goal of catching the bus before it departed, leaving me stranded in the boring town of Tarifa.  Which doomed me to enjoy one of the most interesting towns and the single most amazing sunset the planet has ever produced.  Well, the term sunset may not really be appropriate.  It was more like God decided to create something a little special for the day.  An addendum verse to Genesis would read: "And on the 'whatever billionth' day, God created a sunset. And God saw that it was freakin awesome."  I don't know if this was routine for Tarifa, but the two nights I was there the sun did not set in the west.  It set everywhere all at once.  A painting that couldn't be contained in the canvas it was painted on.  The entire sky from one end to the other lit up a 4th of July display gone horribly wrong, but beautifully.  As I walked along the waterfront I am pretty sure I could hear badass Jesus off in the distance saying "Tada!"

The beaches during the day filled with adventurers.  There to catch the unnatural wind resulting from the tumultuous relationship between the Atlantic and the Mediterranean and lighting up the sky, this time with little individual bits of color I imagined they had managed to lasso out of the sky the night before and ride out across the waves.  As it turns out I was incorrect.  They were actual surfing with kites they had bought at a store, which I still found fascinating and beautiful, if, perhaps, a little less poetic and mystical.
One negative about Tarifa:  it will make you regret not being born a cow.  If you existed as a bovine it would enable you to partake in so many more of the gustatory delights that the town has to offer, as you would have more stomach compartments to fill.  Of course, you would not want to be a typical cow, content to dine on an entree of grass with a side of grass all day.  You would have to be a cow who enjoyed the experience of trying many different types of food.  Tarifa is a seafood Nirvana.  They have two giant bodies of water from which to enchant the tastebuds of pleasure seeking travellers.  Grilled tuna and swordfish, paella, tapas of endless variety.  What intrepid, thrill-seeking, omnivorous livestock wouldn't be happy here?
When I finally did make my way to the bus station two days later and got herded into the bus with the other sheep I felt pity.  Many of these poor souls had come straight from the ferry.  "I am so sorry you caught your bus," I consoled the one next to me..  She gave me a look that either said, "You're crazy.  Stop talking to me." or "I don't speak English."  Sometimes the two are difficult to differentiate.  After this we rode along in silence, yet still I grieved her loss all the same.