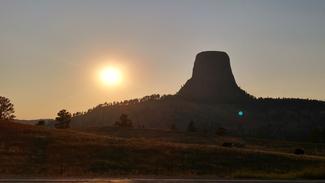 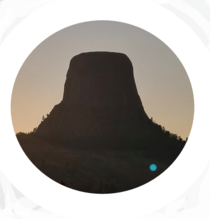 In 1906 President Teddy Roosevelt declared a 1267 foot tall rock the USA's first National Monument. However, it was over 70 years later before Richard Dreyfus famously muttered the phrase, "This means something." over a plate of mashed potatoes and created a generation of young people with a slot for Devils Tower on their personal bucket lists. From this moment on I knew that one day I would make the journey to visit this iconic mountain. And a mere 40 years later this dream became reality.

When you approach the Devils Tower, you wonder if this laccolithic igneous rock is worthy of the drive through the surrounding rugged countryside. Having been previously fooled into visiting places like Wall Drug, South Dakota and Ruby Falls in Tennessee, I knew there were well-hyped, but frightfully lame sites out there laying traps for the unsuspecting traveler.

My mind was prepared for disappointment, but then I crested the top a hill and beheld my first glimpse of the tower I had created in food and on my Etch-a-Sketch since age 11. Still miles away and only a blip on the horizon, it was immediately recognizable and obvious why a group of visiting aliens with a flair for the dramatic would choose this as the location for first contact.

I approached at dusk and the monument glowed bright orange-red in the setting sun, as if it were fully aware that it was time for its photo op. Stepping out of the vehicle I was set upon by a gang of opportunistic prairie dogs and a couple of deer, which increased the strange vibe of the place. People have since suggested that tourists probably feed them so they are accustomed to approaching humans. I feel, however, that this is a far too simplistic answer for a question that, with a little ingenuity, can be made much more complex.

Other questions bounce around in your mind as you get closer to this unique natural formation. Mostly what, how, and why. Eventually, my "what" will be answered, my "how" much less so, my "why" not really at all. Science tells us that the Devils Tower is an igneous intrusion. But standing here in the shadow of this surreal orange tower there is something about it that transcends the guidebooks simple explanations of magma rising through sedimentary layers, or plugs left from eroded volcanoes.

While circling the tower's base I lean more towards the Lakota version of how the Devils Tower was formed: Young girls chased by bears and praying to the Great Spirit who raised the ground they stood upon up into the sky. The vertical lines in the rock created by the claws of the bear as it fell away when the rock rose skyward.

Richard summed it up best, "This means something." Even at the end of the movie you would find it difficult to put into words what that pile of potatoes means. What exactly does that plop of starch representing a gigantic out of place spire in the plains of Wyoming mean? In the movie it is where first contact is made with alien life, meaning a complete upheaval in everything we think we know. Which is more of an erasing of meaning than a providing of one.

This, I think demonstrates why we go there. The Devils Tower has become somewhat of a metaphor for that search for meaning, a search for something. There are other places we go as well. The Grand Canyon, the ocean, the Fjords of Norway, or even that one apple tree in your own home town that somehow produces a flavor never duplicated in your produce section. They mean something. And when I am there I am closer than ever to knowing what that something is.