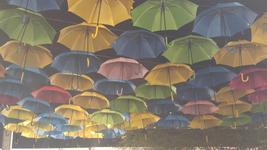 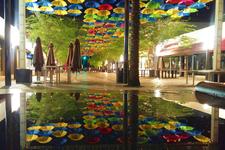 The World With An Umbrella Sky 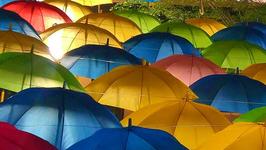 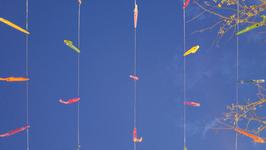 Some of us - rumor has it - occasionally have ideas. Most of these ideas are quickly discarded because they are premised with the thought, " I wonder how much time I would spend in jail if I . . ." or "I wonder how much it would hurt if I . . ." These ideas should typically be quickly thrown out. Other ideas we abandon for less viable reasons, such as "I am sure this has been done before," "I probably could never accomplish that," or "What would other people think if I . . .?" It is this second group of arguments that, when they are ignored, the results often change the world.

Our minds are well trained to think our own ideas are silly and unimportant. Dmitri Mendelev created the periodic table of elements only after his brain whispered to him that if it would be useful for science it would already exist. Giordano Bruno warned himself that the Church would consider it heresy if he expounded on the ideas of the sun being the center of the solar system and the stars being other suns of other solar systems before he ignored himself and went on to be burned alive by the Church as a heretic. Ogg only drilled a hole in Bartoc's skull to save his life after thinking, "What me doing? This crazy. Who me kidding? Damn it, Zod, me a caveman, not a doctor," and other stereotypical caveman expressions. More recently, the founders of Sexta Fieira would not be making the world a brighter, happier, more beautifull place had they listened to those voices saying how stupid it would be to hang umbrellas in the sky.

The Umbrella Sky Project came to Coral Gables, Fl recently, bringing with it economic boost to a community, a whole plethora of photos on social media of people jumping, and most importantly, joy, beauty and inspiration into the lives of thousands of people. The Umbrella Sky Project, if you have never heard of it, is, perhaps not surprisingly, a bunch of umbrellas hanging in the sky. Such a simple, almost childish concept with insane aesthetic and artistic results. Begun in Portugal for the dual purpose of making the street festive, while simultaneously cooling the street, it now moves around the globe creating excitement and wonder from city to city.

I happened to be on Giralda Plaza the day they first began to put them up, and even simply laying upon the travertine these haphazardly strewn piles of colorful precipitation repelling devices possessed an energy. Later that evening they were hung and even in their cocoon stage they were magical. The wonder and awe barely contained inside them by a thin strip of nylon and some velcro straps. I walked through that next morning before sunrise and the wardrobe remained secured, but the magic and wonder leaked profusely around the edges and ran down their slick surface onto the plaza below.

Giralda Plaza is already a special place. A car-free land awash with delicious eateries and wondrous coffee. From Basque cuissine to Peruvian ceviche, Cuban coffee to cappuccino, burgers to bao buns, whatever your tastes, you can find it here. And Stephanie's Crepes is just down the street. Live music and dancing frequent the plaza and anywhere you come from is just a free trolley ride away.

Unfortunately, the plaza is loomed over by the hideous Banesco building - a nondescript bit of industrial lack of imagination, which stands between the Giralda Plaza and the beautiful and elegant Alhambra Towers like some Dickenesque school marm assigned to keep the frivolity at a manageable level. This building desperately needs a Wynwood-style makeover. Some classy and sophisticated art to blend into the scene around it or at least a giant banner apologizing for existing as such an eyesore in the midst of this wealth of aesthetic pleasure.

Later that day I walked back to the plaza and felt as though I had entered another world. A surreal experience accompanies that first moment standing under the canopy of color and wonder. It is difficult to believe that what you are viewing is actually there. It appears fake, as if it were painted up above you by some Jack and the Beanstalk type giant if he possessed a taste for creative visual expression more so than the blood of geese loving Englishmen. This is a work of art that you walk right into and become a part of. During the Umbrella Sky Project the outside world becomes barely noticeable through the ceiling of wonderment. You enter the plaza and the outside world sort of melts away like a Nazi looking into the Arc of the Covenant, but without all the disgusting residue.

​ The Umbrella Sky World is a happy place. No matter how much you love your life, the magic of walking into a completely surreal fantasy world continues to captivate us. Why else would we still buy novels or watch movies? Standing under an enchanted sky conjures up unbridled merriment and transports us out of our day to day existence to a land many of us haven't visited since our childhood. A magical land where our dreams are not scoffed at and our most ridiculous desires become possible.