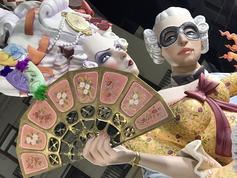 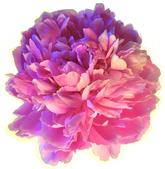 I would imagine that most artists, if asked, would say they dream of one day creating a work of art that would hang in the Lourve in Paris or perhaps on display in the Prado in Madrid. Most artists don't actually get asked this often because artists tend to be on the weird side and the majority of people are afraid to approach them. But even the weirdest of these weird humans if asked a dream for their artwork you wouldn't expect to respond, "My dream is that one day a mob will surround my art and cheer enthusiastically while they set it on fire."

I know if I personally ever succeeded in creating anything even the minutest fraction as remarkable as any of the Fallas in Valencia's Festival De Las Fallas I would find myself perched atop it like an overly zealous environmentalist in a redwood if someone so much as walked down the street with a match. How they can work on this for a year knowing its eventual fate astounds me. But really isn't all of life this way?

We strive. We create. We build these temporary lives.

Any respectable nihilist will expound upon the pointlessness of it all. Why bother when none of it means anything anyway? This is why nobody wants to hang around with nihilists.

The ninots, the statues of the Fallas, don't mind hanging out with nihilists, or anybody else. They are too busy enjoying life to concern themselves with the labels people give themselves or others. All who choose to come rejoice in the gift of life are welcome to join them. A ninot's existence is brief and they don't bother with anything that fails to bring joy, excitement, and beauty to the world around them. They truly live in the moment.

The ninots stand in plazas amidst the most spectacular architecture above imposing, graceful statues and beautiful, serene fountains. Any other time of year you walk around in awe of these buildings, statues and fountains; but during Las Fallas you barely register them. The ninots dominate and rule over everything. It is partly their size, as they loom over the plaza and everything in it, but mostly it is attributed to their sheer beauty.

Despite their shared enthusiasm for life, the ninots represent numerous diverse backgrounds and personalities. There are the sophisticated, but opinionated Parisians, the energetic and highly sexual swashbuckling pirates, and the elegant, sensual Victorian age vampires. The street-wise musicians hang out with the scientific dreamers and the superhero fannerds party with the equally fanatic Disneyites. Fallas know life is too precious to waste it squabbling over petty, trivial differences. It is all about being yourself and feeling good about it, without needing to belittle someone else to make yourself great. Their confidence comes from a knowledge of who they are and self worth doesn't rely on how they match up against the Egyptians in the next plaza. The Fallas coexist within the beauty of this amazing city and in their diversity make it all the more magnificent.

Still, in all things there emerges an ultimate winner. How anyone manages to distinguish a higher level of greatness between a Michelangelo and a Leonardo I have no idea. I guess it basically comes down to a preference for the katana over nunchucks, or vice versa. The 2019 victor within this literal life and death vote I found intriguing. While undeniably spectacular and intricate, it wasn't necessarily my favorite in terms of beauty. Amongst all the adult themes, political and social statements, and dramatic, in-your-face theater the winner was a tribute to our childhood -- a pile of toys from our simple, earliest beginnings. Granted, it was the most dramatic and impressive pile of toys I have ever seen in my life, slightly beating out one created during a multiple five year olds' sleepover at Grandma's. This pile of toys had everything. Everyone's childhood was represented and new life was breathed back into old memories. The people voted and innocence and simple happiness won.

As you wander about the city from plaza to plaza, and alternate reality to alternate reality you can fully lose yourself in this fantasy world. Parades of people dressed in colorful, traditional clothing and swaying bands marched through the streets. Three story tall statues of flowers. Dining on paella, forearm-sized churros, pumpkin bunelos dipped in chocolate, and washed down with horchata or a delicious cafe bombon, as you watch, listen to, and literally feel the vibration of the perpetual fireworks it is impossible to imagine a grand finale that could top the regular festivities.

Then comes La Crema - The Purging. No, La Crema doesn't literally translate to "the purging." Well, unless it does. Which is entirely possible considering my shockingly limited grasp of the Spanish language for someone who lives in Miami. Most of our festivals and holidays could be called "The Purging" - an end of the old and a bringing in of the new. New year, new life, new season, new future. But Valencia does it best or at least the most dramatically. Each March the city is set aflame and burned to the ground to be rebirthed from the ashes. Symbolically, mostly, because that is more cost effective. They did it literally once in 75 BC, but then the Romans came along and took over for a bit and put an abrupt end to that nonsense.

La Crema is madness personified. Merely watching the preparation for the burning caused a few synapses in my brain to begin a noticeable twitching which has yet to let up. I was a bit disturbed as I watched them string the mile long fuse around and throughout the fallas like an obsessive compulsive person wrapping garland around every inch of a gigantic Christmas tree, then covering every branch with firework ornaments and firecracker tinsel. When they pried open the corners of the ninots and began shoving truckloads of fireworks and explosives into them my hold onto reality slipped slightly away. Then they brought out the gasoline and the cerebral twitching began as gallon after gallon was poured inside. The entire spectacle is a pyromaniac wet dream.

It is pouring down rain now, but the only noticeable reaction I can detect from anyone is a determination to not react and pretend that it isn't. At this point I was still young and naïve enough to wonder if the rain would effect the events.

There exists a somber moment of respectful silence before the fuse is lit; then the fireworks begin and the ninots go out of this world as sensationally as they lived in it. Sparks, explosions, shooting flames, snaps, crackles and pops. The world is a conflagration all around you. You shield your eyes and hold your ears, but there is no defense against the searing heat. I do not have first hand knowledge of what it is like to be inside a running microwave wearing an aluminum foil suit, but I suspect it feels something like this. The rain still falls, but it never actually reaches the ground as it seems to be evaporating in this giant dome of heat around us. The ninots stand tall and proud within the flames. This is their moment and viewing the silhouettes of familiar figures you have grown to know over the past several days creates a weird combination of sadness and awe.

After the last of their beauty has burned theatrically to the ground you stand with the rest of the crowd in the momentary numb silence. Your eyesight vague and unsure, your hearing in the middle composing a letter of resignation to your brain. Your few remaining layers of flesh bubbling and already too well cooked for those people who order their steaks just a touch pink. The smoke and ashes settling to the ground as the rain manages to once again obey the laws of gravity. You stand there and wonder what would possess an entire city to do this year after year.

Then you run off to find the next ninot about to be the centerpiece of madness. Because this was one of the most amazing experiences of your life and you only have a few hours left to experience it again.