​Driving across the desolation of Wyoming a couple of days before the eclipse enroute to Salem, Oregon I was critiquing the landscape. Rather uncomplimentary I described Wyoming as a state that had been painted in watercolor by an artist whose pallet had been reduced to bits of yellow and green, which had been previously contaminated by copious amount of white.
Fortunately, I hadn't written "Oregon or Bust" on the back window because of the embarrassment this would would have caused when we drove into the small town of Dubois, Wyoming and became enamored enough by its quaint charm to abandon our plans and settle into an unexpected respite from driving. Thus, began a quest for the perfect viewing location for an event billed in a somewhat grandiose way as a once in a lifetime opportunity for something that occurs nearly every year.
Still, despite my cynicism, here I was. Along with thousands of crazed umbraphiles, vying for my own best seat in the house for this extraterrestrial piece of performance art. It was like these two famous entertainers, the sun and the moon, who were traditionally solo performers had agreed to perform a rare duet and the entire world was scratching and clawing to get tickets no one was scalping. We lucked into a pair of tickets for seats in this charming Western town mostly by accident. Stopping in for a quick cup of coffee at The Perch while searching - without any actual expectation of success - for a room to spend the night. Then a casual comment to Sheila, who is co-owner of the shop, began a determined joint effort to make Dubois our eclipse home.
Sheila and her husband, Eric, began discussing options and making phone calls in an entirely unexpected way, displaying the level of kindness typically reserved for people who you have invested more in than a couple of cappuccinos. Eventually they put us in contact with the enigmatic and dubiously named Q, who lives a couple of miles down the road and has a partially built cabin that may be habitable. Q even offered to come and flag us down at the road we needed to turn off on.
Well, it turns out Q and his family are not as dubious as his name led us to believe. Likewise, his cabin, although not yet finished, turned out to be fully inhabitable and delightful, nestled down in a beautiful valley on the Wind River. So armed with a comfortable and rather fetching cabin, pleasant and informative hosts, and a complete lack of knowledge about what to expect we set out to find the ideal staging locale for the show.
This didn't prove terribly difficult. For, within a brief walk from the cabin we discovered a hill. Atop this hill in the middle of a valley surrounded by obscenely picturesque red and white striped cliffs we found an overlooked slice of eclipse viewing heaven. Leaving us plenty of time to enjoy a meal at Cowboy Cafe where they have more varieties of pie on the menu than most restaurants have plates to eat them from. After which we succeeded, eventually, in finding the last remaining pair of eclipse glasses in town -- because when you travel across the country to see an eclipse it is a good idea to wait until the night before to think about the one thing you need to actually watch it.

The next morning we climbed to the peak of the hill and waited for the show to begin.
I was unprepared for the experience that followed. No matter how much one reads about it ahead of time, regardless of the number of photos you may see of the show, there is nothing to prepare you for the feeling. Because that is the truest experience of a total eclipse - the way it feels.
Neither the most talented and inspired writer nor the most skilled photographer in the most fortuitous of locations could successfully capture the sense of vulnerability and fragile hold one has on their own mortality as the phantom moon glides in and attempts to steal away the light of the life-giving sun. There is a moment when that final bead of the sun winks out of existence where you hold your breath. Then you worry that you perhaps held it a moment too long and will never be granted another.
Then it happens. The sun vanishes into a perfect black sphere, but its light bursts uncontained around its surface in a magical light. The eye looks down upon you and you draw in that first post-eclipse-moment breath, enjoying the feeling as your lungs inflate anew.
Suddenly, in spite of how alone you thought you were, thousands of voices cheer out into the darkness, and you hear your own voice join the chorus, a moment of strange primal connection. Your skin is a landscape of goosebumps and it isn't from the sudden drop in temperature. It is from the energy of an entire race of people being given a reprieve. Like the sun winking out and being rebirthed we have the opportunity to be the people we know we are capable of becoming.
Like most everything in life, the journey to stand in the shadow of the Earth's ultimate black out isn't so much about an atronomical event as it represents a search for connection. The great irony of life is this: For a species with more and more members all the time we continue to find ourselves more and more alone. It is our fear that keeps us apart. Fear of being hurt, fear of rejection, fear of failure, fear of the unknown. We live our lives lonely and alone because we have been trained all our lives to be frightened. There are 600 million people in North America alone. Most of them classify themselves as lonely. How ironic to think that over 300 million could be lonely. Imagine if 150 million of those people went out and made one of those other 150 million people their friend.
The solar eclipse is a regular cosmic event, but more than that, it is a reminder that we as humans have a choice. Each and every day we can decide to start down a new path. Each new breath represents another chance to become the person we know we were meant to be. 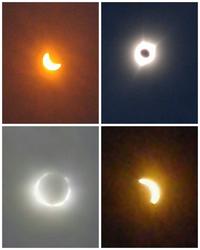 ​Total Eclipse Of Yourself 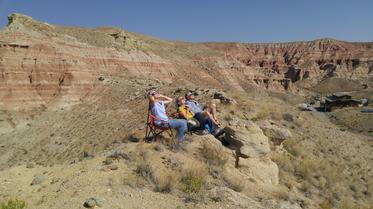